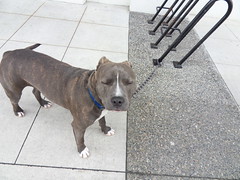 Pit bulls are a common breed of dog in the US, and one that is regarded as being very dangerous. In actuality, they’re not as dangerous at their reputation but they do require a lot of training to handle correctly. Because of their “tough dog” reputation though, sometimes irresponsible owners will get one and fail to train the dog correctly. This can lead to gruesome dog attacks.

However, an interesting case in Charlotte might give someone pause. Two officers were arresting a man on Allen Street when a pit bull attacked. One of the officers said his foot got bit. The other officer pulled his gun and shot the animal once, causing it to run off. The news story doesn’t say if the animal belonged to the man being arrested.

Was the officer justified in shooting the dog? It is difficult to say without more information. The officer might be held liable by Internal Affairs for unnecessarily discharging his weapon. Perhaps he was scared because the dog was a pit bull. The owner may be held responsible because the dog was improperly penned. Time will tell as this case plays out.

Auger & Auger have been representing personal injury cases, including dog bites, since 1994. We can help you determine if you have a legal case and get you the compensation you need from the dog owner. You may be eligible for medical costs, pain and suffering, emotional distress, and other forms of recovery. Call today for more information.