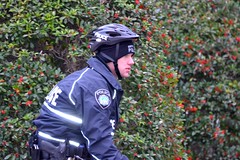 Concord Police have detained a man in connection with a fatal hit and run that occurred outside of a Mexican restaurant. They arrested 48-year-old Darrin Eugene Edwards at his home on Blue Sky Drive NW in Concord in connection with the incident. Police charged Edwards with one count of felony hit and run and one count of misdemeanor death by vehicle.

The victim of the incident was a 50-year-old man named Juan Antonio Torres Jr., also from Concord. He was fatally struck by Edward’s 2014 Jeep Cherokee near the entrance of El Patron. Concord Police believe alcohol is a factor. At present, Edwards is in Cabarrus County Jail under a $100,000 bond.

Hit-and-run is the act of causing a traffic accident and failing to stop and identify oneself afterwards. The penalties and the definition of hit-and-run vary from state to state, but they all have severe legal consequences including the suspension or cancellation of one’s driver’s license, or even lifetime revocation of a driver’s license in certain jurisdictions.

If you or one of your beloved family members has been a victim of hit and run, dealing with the unfortunate incident single-handedly can be very painful. Why not let an experienced attorney assist you with your situation? Having someone who is knowledgeable with the law and willing to support you with your case will not just lessen your worries, but can also help you acquire the compensation you deserve. Call Auger & Auger today for a free consultation.

Posted In: Car Accidents, In The News, Wrongful Death