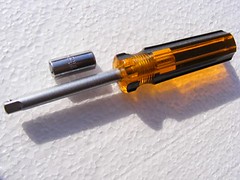 People who commit senseless violence are punished by the criminal system, but victims are also entitled to seek damages through civil proceedings as well. The results of a criminal case weigh heavily in a civil court. The question will turn from “will he pay?” to “how much will he pay?”

Take the case of a man from Union County who is accused of an unprovoked attack on a teen as the teen was leaving church.  He was stabbed seven times with a screwdriver. He received injuries to his pancreas, intestines, and his neck. The teen is recovering at a local hospital, unable to speak but able to write.

Witnesses were shocked at the attack, and believe that the man may have been on drugs. The two individuals had never met previously. Even more shocking, this isn’t the first time this man stabbed someone unprovoked. He did a similar act in 2010 in a Walmart parking lot.

The criminal evidence is heavy against this man, and if he is convicted in this attack the teen may be eligible for substantial damages. Hiring a personal injury lawyer after an attack or an accident is the first step in determining if a civil case is worth pursuing in court. If you have been the recipient of violence from another person, call Auger & Auger for a free, no-obligation consultation.