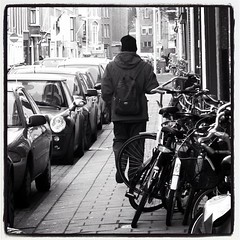 Pedestrian accidents are all too common on our nation’s roads. Studies from the NTSB put about an equal amount of blame on vehicles and pedestrians. Both groups need to obey the rules of the road. A story out of Charlotte put this into perspective.

In one case, a 50-year-old man was charged with felony hit-and-run when a pedestrian was struck crossing Eastway Drive on Thursday. The driver of the truck later called police to report the crime and was charged. The truck is now being processed for evidence.

Police haven’t yet said whether or not the victim was crossing the street at a crosswalk or not, but reporters interviewed people at the bus stops on Eastway Drive. The bus stop on that road is about 50 yards from the nearest crosswalk, and people at the stops told reporters that people regularly cross directly from the stop to a retail center across the street.

Recorded comments from the bus passengers are telling. Their opinion is that if they are aware of the cars and their judgment is good, then there’s no problem. However, this is an extremely dangerous attitude to have. Cars are expected to watch for pedestrians at cross walks, and not at any time. If the victim of this crash was found to have crossed illegally, it would be more difficult for the victim’s family to pursue a civil case. However, the man also ran from the crash before turning himself in. These and other factors will have to be weighed.

If you have been involved in a pedestrian injury accident, you deserve to have your case heard in court. The lawyers at Auger & Auger have been representing personal clients for years in North Carolina. Take a look at some of our testimonials, then give us a call for a free consultation.