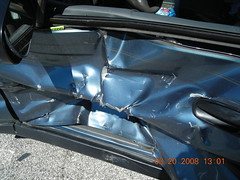 In Shelby Saturday afternoon, a 34-year-old driver was driving a Buick LeSabre recklessly on a busy street while trying to avoid police.  Police spotted Demetrist Lendell Roberts speeding on Dixon Boulevard about 1 p.m.  They began to pursue Roberts, but stopped due to the heavy vehicle and foot traffic.  Roberts continued to flee and ran a red light.  He struck a Ford Taurus in the intersection.  The impact ejected a twelve year old boy and killed the adult passengers in the car.

The driver of the Buick was charged with two counts of felony death by vehicle, felony speed to elude arrest, driving while impaired, driving while license revoked and speeding.

The Center for Disease Control reports that every day about 30 people in the US die as a result of accidents caused by a driver under the influence of drugs or alcohol.  The math makes that about one death every 48 minutes.

When involved in an accident with a drunk driver, the impaired driver’s auto insurance pays claims out of their liability insurance.  If the driver has no coverage, the victim can often collect from their own insurance under uninsured motorist coverage.  Don’t assume there is no coverage.  Speak to an expert who can thoroughly evaluate your claim by looking at your insurance as well as the insurance of the person at fault.

A victim of injury caused by an impaired driver, or in cases like the story above, a victim’s family, may be eligible for compensation through a civil lawsuit.  The criminal court only deals with fines and punishment, a civil suit allows for a victim or family members to file a personal claim against the impaired driver for loss of income, medical bills, pain and suffering among other things.  Personal injury compensation is designed to try and make a victim whole again.

If you have been injured in an accident caused by an impaired driver, call us.  Auger & Auger are experienced in recovering compensation for injuries, pain and suffering, lost work and loss of enjoyment of life in these types of cases.  We will listen to you and give you an honest evaluation of your claim.  Call us today for a free consultation.