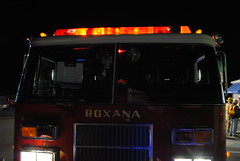 No one is immune to accidents. Police cars, fire trucks, and ambulances can not only be involved in accidents, but even cause them, in the right circumstances. Though they have special laws that allow them leeway to get to where they are needed as quickly as possible, this only means they have to be extra careful, watching out for those that do not get out of the way quickly enough, or to not drive so rapidly as to lose control over their vehicles.

A preliminary investigation by the Charlotte-Mecklenburg Police Department suggests the driver of a fire truck was going too quickly when his truck flipped on a south Charlotte street. Four firefighters were injured in the accident.

The firefighters were on the way to a medical call when the truck flipped. They were all treated at the hospital for minor injuries and have all returned to full duty. No other vehicles were damaged in the crash.

The CMPD report says the truck was moving at about 44 mph when the crash occurred, on a road where the speed limit was 25 mph. The truck skidded 25 feet and then burst into flame, causing around $800,000 in damage.

No charges have been filed regarding the crash, but the firefighter who was behind the wheel at the time has been suspended from driving the truck for the foreseeable future. No names were released regarding any of the injured firefighters.

A second fire truck was called to put out the flame of the truck that was overturned.

Those who suffer an injury through the acts of another should get the legal compensation necessary for recovery. That’s what Auger & Auger is here to do. Contact us right away and learn how we can help you get the financial support you’ll need after your accident