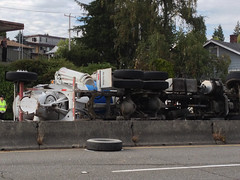 Shortly before 10 a.m. on Capital Boulevard, a driver fleeing from police pulled into the path of the truck, causing the truck driver to swerve and, ultimately, tip his vehicle.

20-year-old Skylar Steven Blackley led police on the chase after Franklin County deputies attempted to serve a warrant on the man. The chase began in Wake Forest and saw Blackley driving west on the Bypass, eventually traveling in the eastbound lane. As Blackley crossed into traffic, he veered into the path of the cement truck.

Blackley continued driving with little regard for the condition of the truck driver or the safety of other drivers on the road. The chase ended in Franklin County with the arrest of Blackley. The man has been charged with driving the wrong way on a dual lane highway, speeding, felony hit and run, red light violation, and reckless driving. Police report that more charges are imminent.

According to deputies, high-speed pursuits are dangerous for everyone involved, including other drivers on the road.

“It absolutely can be nerve racking for the deputies and all involved but they take every precaution they possible can based on all the training that they have received,” said Terry Wright, FCS Chief Deputy.

In the wake of the pursuit, police are imploring that the public pull over if they see a police pursuit coming their way, no matter the direction of travel. Move to the side of the road and stop your vehicle for your safety. Police also encourage motorists to keep radio volume at a level that allows them to hear sirens and noises outside of the vehicle.

Shortly after the accident, the driver of the truck was transported to WakeMed with minor injuries.

If you have been injured in a collision caused by the reckless and careless driving of another, you have rights. Contact at experienced auto collision attorney who can fight for your rights. You deserve to be compensated for any medical bills or loss of wages you experience.