Sharing the Ocean with Sharks 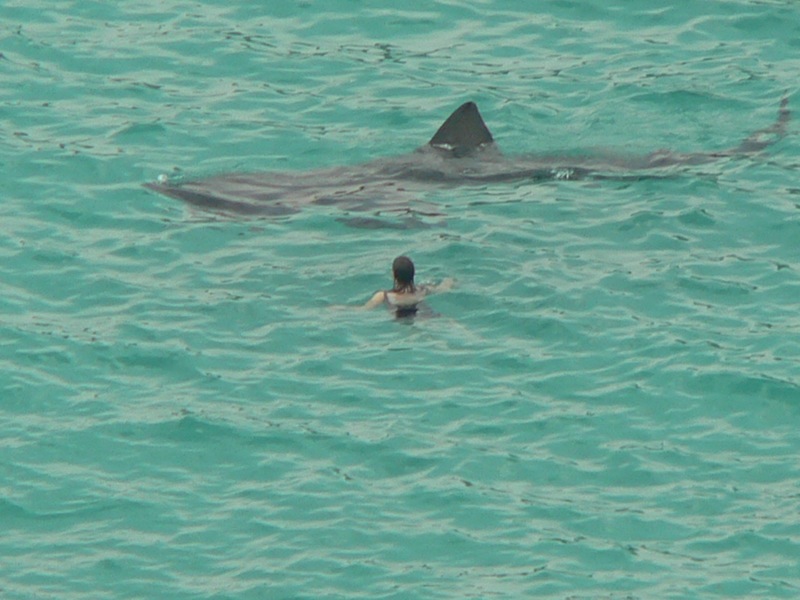 Last week was shark week on the Discovery channel, but it has been what some would call shark season on the coast of North Carolina. Eight people have been bitten by sharks in less than a month in the Atlantic Ocean. News of the attacks has spread far and wide, making nightly reports in countries around the globe.

People are currently being urged to stay out of the water on certain beaches across the state. According to Larry Cahoon, a shark expert, you can protect yourself from shark attacks by taking specific precautions.

Sharks are more likely to attack when they hear fish struggling as they are being reeled into fishing boats. If you see fishermen on the water, stay out. Hearing these fish struggling is akin to ringing the dinner bell for any nearby sharks.

Cahoon also says that shark attacks can happen at any time. Do not believe it when you read that most attacks happen near dusk and dawn. Sharks have poor eyesight no matter the time of day, and these ocean dwellers explore with their mouths. By the time they realize you aren’t a meal, you have already been bitten.

While some beaches have been closed, just as many have not. Experts are telling people to participate in water sports like jet skiing, boating, and surfing with caution. If you have a cut and are bleeding, get out of the water immediately. If you see a shark, head for shore and warn others.

It is strongly suggested that if you are in a boat or on a jet ski to stay aboard your vessel. Should you capsize or fall off, get back on as soon as you can. If you cannot get back aboard your boat or ski, remain as still as you can while you are in the water. Your struggles can attract sharks that are in the area. You are less likely to be bitten if you stay still.

This season’s shark attacks are out of the normal for the area, and researchers are working hard to discover the reason why the attacks have intensified. Until then, people who want to go in the water are cautioned to do so at their own risk.

Posted In: In the Community, In The News, Safety Tips