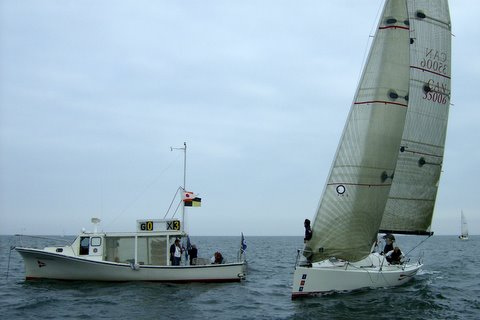 Last Sunday, two adults and two children went on a fishing trip on the waters of South Carolina. They were rescued by the Coast Guard on Monday morning, two miles from the wreckage of their capsized vessel.

The group left Remley’s Point just before dawn on Sunday. The boat lost power around 9 a.m., erasing the ability for the group to summon help. As high winds began to kick up powerful waves, the boat overturned and all four aboard were tossed into the water. When no one on the boat was heard from by Sunday afternoon, the spouse of one of the adults on board contacted the Coast Guard.

As the Coast Guard turned into a longer pattern of searches, they spotted an orange life vest being waved in the water by one of the boys. The four had drifted close to two miles from the capsized vessel. Even though they had strayed, through no fault of their own, from the boat, the four would eventually have been found, according to the Coast Guard. Why? Because they did the right thing in telling family members exactly where they were heading.

Once the four survivors realized that they had been spotted, the boys wasted no time in being rescued. The pair swam for the Coast Guard’s boat instead of waiting for it to come to them. The pre-teens were pulled aboard, sunburned but happy. The boat reached the men who were also pulled up and onto the rescue boat.

The rescuers reported that all of the survivors were fatigued, but that the children still had an ample amount of energy. Hungry and thirsty, the boys were given beef jerky and water by the crew on the Coast Guard vessel.

Rescue workers credit the proper wearing of life jackets and a Yeti cooler as keeping the survivors afloat. Both men and the two boys were able to walk off of the Coast Guard vessel of their own accord once it docked. Each walked into the arms of frantic family members happy for their safe return.

If you have been injured in a boating accident, our personal injury attorneys are here for you. We will fight to get you and your family the compensation that you may be entitled to by law. Call us today for a free consultation, and let us review the facts of your case. We are here for you now.