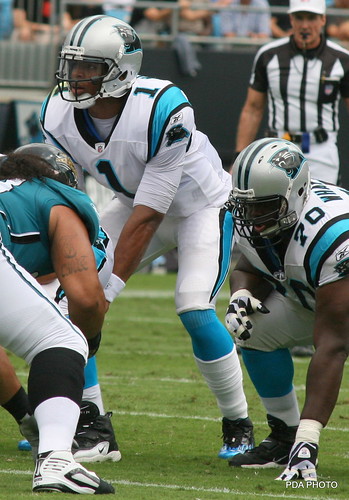 Charlotte, N.C. – If you live in North Carolina, chances are you have heard of Cam Newton. The popular quarterback of the Carolina Panthers was injured in a vehicle collision just over a week ago near Bank of America stadium.

You may think that Newton would be thinking about returning to the game as soon as possible, but you would be wrong. Says Newton, “As far as when I’m coming back, who cares. That’s not something I’m worried about. I’m just thankful to have breath in my lungs so I can breathe again.”

Two small fractures in Newton’s lower back have sidelined him from the NFL for the foreseeable future. The injuries, similar to those that Tony Romo of the Dallas Cowboys suffered, saw Romo sidelined for only a single game. Newton has started rehabbing at BOA.

Newton updated coaches and fellow players before addressing the media.

“I’m just lucky to be alive,” said a grateful Newton.

During the press conference, Newton describes details of the accident. A driver pulled out in front of Newton, first slowing down and then speeding up, ultimately clipping the back end of Newton’s pickup truck. The truck was forced into a roll, crushing the roof of the cab.

Newton was able to crawl out of the truck, smiling all the way. “It’s great to walk away from something like that.”

According to the Charlotte Department of Transportation, the intersection where the collision occurred is number four in the rankings of accident locations in Charlotte.

Even though Newton was traveling at the posted speed limit of 35 mph, the addition of a lift kit is likely the cause of the rollover. According to Sgt. Scott Sherwood of the Charlotte Mecklenburg Police Department, “It just makes it a lot more prone to when it sits that high.”

Newton will return to the game once he has been cleared by doctors. As of this report, it is not clear when that will occur.

Involved in a Crash?

Collisions like Newton’s are not uncommon. Fortunately, Newton was able to walk away with minor injuries. Sadly, many are not. People are severely injured and worse, killed, in an accident in North Carolina every day.

Whether your collision was caused by distracted driving, vehicle failure, or any one of the numbers of other factors that contribute to accidents, you have a right to recourse. The experienced attorneys at Auger & Auger are here to make sure that you get the compensation that you deserve.

We encourage you to call our offices as soon as possible. Our experienced auto accident attorneys want to help you. Whether you have lost wages, have mounting medical bills, are forced to live with pain, we want to ensure that you get the compensation you deserve. Call our office now for a free consultation!