A Year After Tragedy on Fair’s Midway, Inspectors are Cautious 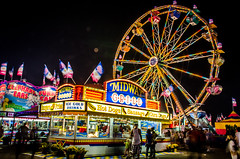 A year after the tragedy at the North Carolina State Fair, safety is a word on everyone’s tongue. Especially it would seem for Steve Troxler, Agriculture Commissioner for North Carolina, who used it numerous times in his speech on Monday.

After last year’s accident that left several people injured, some severely; this year’s safety inspectors are paying even closer attention than usual. One of … Read more

Posted In: In The News, Third Party Claims

It seems like there are a lot of news stories today about violent shootings at schools and places of employment.  Definitely more stories than we would like to hear.  They have been reported throughout the United States and it’s scary that they can happen anywhere at any time.  Even Georgia is not immune from such violence.

With all the bad news it’s good to hear some good news about one of these stories.  The FedEx facility shooting in Cobb County … Read more

Fatal Crash in Charlotte-Mecklenburg Kills One and Injures Three

A 25-year-old man died from injuries he sustained as a result of a rear-end collision in Charlotte-Mecklenburg on Sunday.

Barnette White Jr., was a passenger in a 1999 Toyota 4Runner when a 1998 Saturn crashed into the back of the vehicle ejecting White.  The driver of the Saturn, 28-year-old Daniel Lewis Roberts was charged with DWI following the accident.  Roberts was seriously injured as a result of the accident.