Home › Blog › Lions, Tigers, and Bears, OH MY! When Animals and Cars Collide

Lions, Tigers, and Bears, OH MY! When Animals and Cars Collide 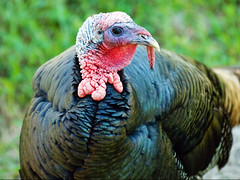 For many people, squirrels, raccoons, opossums, and stray pets are the only animals to be on the lookout for when driving. For others, deer pose the greatest threat. While these animals can cause damage, they are nothing compared to these strange accidents from around the world that occurred when animals, drivers and vehicles came together in a series of events.

You do not expect a turkey to fly in front of your car, much less through your windshield, but that is exactly what happened to an Ohio State fan as he was driving home from a basketball game at the popular university.

Cruising down the highway, the driver barely had time to point the bird out to his passenger when it flew in front of the car and straight through his windshield. The turkey ultimately met his demise, and the impact caused the driver to lose consciousness, veering into a guardrail and a concrete divider.

A tourist in South Africa was more than surprised to have his vehicle flipped by a large elephant while in a game reserve. It is reported that the elephant may have mistaken the car for a female of his species. Rubbing against the car to show his affection, the elephant received no love in return. Enraged, the powerful animal flipped the car over with the driver and passengers inside.

Camels seem to be slow, calm creatures, but that may have been exactly what caused this accident. A driver in Saudi Arabia crashed his car into a camel standing in the middle of the road. The camel refused to move despite the oncoming car, causing the collision. Both the car and the camel caught fire, resulting in devastating damage to the vehicle and the death of the animal.

Accidents of any type are stressful. For many people, hurting or killing an animal can make the collision worse. While uncommon, run-ins such as these do happen. If you or your loved one has been injured in a motor vehicle accident, contact the experienced attorneys at Auger & Auger for immediate assistance.