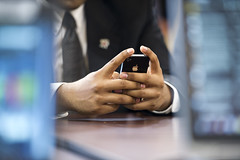 Caran “CJ” Johnson — a well-known and respected member of PDX/SW WA Twitter community under the handle @ScanCouver — live tweets many 911 calls, news, weather and traffic alerts as well as fatalities in the city of Vancouver, Washington. That day, she re-tweeted information about the accident from the local newspaper, then details from the State Patrol outlining closures around the collision scene — unaware that the tragedy she was describing was actually her own.

A 47-year-old Vancouver man was killed in a collision on Interstate 205 northbound Wednesday afternoon about 1:40 p.m. According to police, Craig Johnson died when his Hyundai crossed the grassy median near Padden Parkway, entered the southbound lanes of I-205 and collided with a Toyota pickup.

Soon she realized her husband wasn’t home from work as scheduled, he was not answering her calls and through a tragic turn of events, she learned that he was the fatality she had just tweeted about. CJ’s husband, Craig, was the only who died in the accident. The driver of the pickup which is a 50-year-old woman from Tacoma was transported to Peace Health Southwest Medical Center with serious injuries. Unfortunately, the cause of the collision is still under investigation.

Caran Johnson received dozens of condolences through social media Wednesday night, and an online fundraiser had raised $941 of a $10,000 goal as of 10:50 p.m when the story was written. Money won’t definitely bring her husband back. However, it can help ease the strain of a funeral, burial and associated costs, as well as replace some of his wages that are now gone in the weeks before Christmas.

No words can describe the pain of losing someone you love. If you suddenly found yourself wearing Caran Johnson’s shoes, let an experienced lawyer assists you with your case. Contact Auger & Auger for a free consultation.